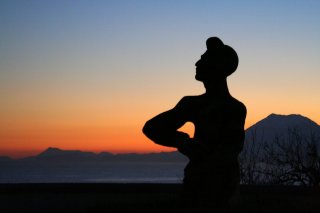 There was a very rich man, who was also very miserly. His only joy was in the accumulation of money. Somehow, he had managed to marry a beautiful wife, who was also very generous and kind hearted. As you might expect the miser was deeply unpopular, but, everyone liked and admired his self giving wife. However, she thought. “Since, he is my husband and no one else likes him, what can I do? I, at least, must be kind to him and offer him my support. Despite, receiving no praise from her miserly husband, she served him night and day.

Then a famine struck the region. The miser gave nothing. But, his wife tirelessly travelled the region offering help and lending people money to buy rice. The people who borrowed money wanted to pay back the wife; but, she refused saying.

But, the people refused saying ‘no we really want to give it back, when we can.’

So she said something quite surprising. “If you really want to repay me, then give me the money the day my husband dies.”

People were quite surprised at this statement and one of her sons happened to overhear her. He was perturbed by his Mother’s strange statement and so went to his father to report what he had heard.

The father could not believe it. Why was his dear wife asking the money to be repaid only when he passed away? Thus the miser challenged his wife, asking why she had asked the money to be returned on his death.

She said, “You don’t understand. You see, people don’t like you. They hate you. Everybody wants you to die today, but many people have taken lots of money from me, and by nature people don’t want to pay it back. From now on, instead of thinking of your death, they will pray to God to keep you alive so that they don’t have to pay it back. I want you to live for many, many years. Who knows? One day you may also become very affectionate, kindhearted and sympathetic.
“I played a trick. I want them to pray to God every day that you live. This will make me happy. Who cares for the money? I want you to live for a very long time.” The husband was extremely touched by his wife’s wisdom and love for him and he vowed to be more compassionate toward others.

What Can We Learn from This Story?

It is easy to like kind, generous and self giving people. But, it is not so easy to like and be kind to a miser. But, the wife’s devotion, love and selflessness slowly started to make an impression on her husband. Even her miserly husband felt obliged to lead a better life. This shows that if we really wish to change people, it is through constant self giving and not constant criticism.

2 thoughts on “Lending Money With Wisdom”