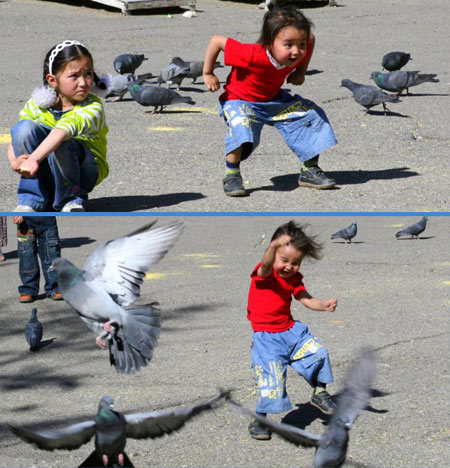 It’s rather amazing that as children we perpetually look forward to the time when we grow up and can do anything we want, but then once we grow up and become laden with responsibilities, we wistfully look back to those carefree childhood days! Certainly we ‘miss’ out on some things as we make the transition to adulthood; by looking at how children see the world, we can certainly learn (or relearn) some things to introduce in our own lives….

Living in the moment

… The world began this morning,
God-dreamt and full of birds…

As we grow older, our thoughts become increasingly focused on either the past or the future instead of the now; we seem to pick up the art of nursing grievances about things that happened and worrying about things that may never happen. But for a child, everything is unfolding in real time before his eyes; he has not yet learnt the art of being consumed by past or future. I remember a very interesting experience about a year ago when I was playing badminton with some young friends of mine. The four year old youngest brother wanted his older brother to give him the badminton racket, and the older brother pushed him away, whereupon he promptly say down and started to cry. However, out of the corner of his eye he spotted a spare shuttlecock lying around – the tears soon dried up, and in no time he was totally absorbed in his new plaything. I was totally amazed at how quickly his focus had switched from crying to playing with the toy; if that happened between adults we’d be still feeling aggrieved about it days later!

A perpetual sense of discovery

I know not how I may seem to others, but to myself I am but a small child wandering upon the vast shores of knowledge, every now and then finding a small bright pebble to content myself withâ€

For a child, the word ‘routine’ is pure anathema. Everything – even the most ordinary objects – has to be investigated, touched, and experienced. Ordinary things like a dog barking in the street or the postman delivering post through the letterbox often have children pointing in open-mouthed wonder. And yet as little as thirty years later, as adults, this constant questioning and discovery of children sometimes irritates us because we have ‘much more important’ things to do! We have the privilege of living on such a beautiful planet, and one way of truly appreciating that is seeing it through the eyes of someone who is discovering everything for the very first time.

Living in the heart

To lose one’s child-heart
Is to lose everything.

It is not until we reach early adolescence that our minds become fully developed. It is no coincidence that with the mind’s ascendancy, negative qualities such as doubt, hesitation, and feelings of inferiority or superiority also become ensconced in the human psyche, and our actions are more likely to be determined by the pushes and pulls of society than our inner feelings. However before the mind starts dominating, the heart is to the fore – the spontaneous, empathetic part of our being that does not plan or calculate, but just spontaneously acts, creates and discovers. Unlike the mind, the heart has no inhibitions. If you asked a bunch of six year old children “who can paint?” all hands would shoot up; the same question asked to adults might not raise any hands at all! As we grow up, we imbibe very fixed ideas and conventions about what we can and cannot do, but children have no such restrictions – life for them is just one long play session.

The secret of unconditional love

Give a little to love a child, and you get a great deal back.

When we give our love to someone, we often do it with the subtle expectations of what the other person should do. Then when the other person doesn’t fulfill those expectations, there can be a great deal of disappointment, hurt, and also increased cynicism about the whole business of love in general. But when a child loves, his love is unconditional, and when he smiles at you can feel it beaming from him like the rays of a sunbeam. It is a kind of love that comes straight from the heart, without preconditions or expectations; it is a pure expression of who he is. This kind of love is something that we can still access as adults – inside the deepest part of our being there is an instinctive yearning to reach out to people, to empathize, and when we give this love to others our own deepest part is fulfilled.

13 thoughts on “Life lessons you can learn from children”