It’s easy to be critical of the world, but it’s much more difficult to deal with criticism directed at ourselves. Criticism is something we often like to give, but not really receive. However, no matter how saintly we might or might not be, we will get plenty of practise for dealing with criticism at some stage of our lives. When we are faced with criticism it can be an unpleasant experience, but equally if we take it with the right spirit, we can use it all for our advantage.

These are some tips for dealing with criticism. 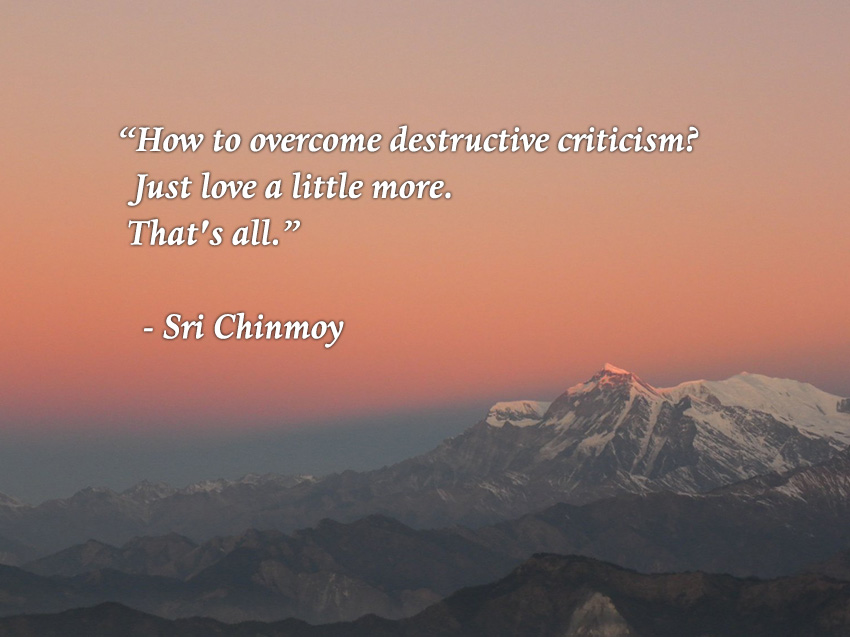 1. Take a deep breath and don’t react. The problem with criticism is that we can feel an instinctive need to defend ourselves and argue. Often this is not necessary. Remember to separate your ego from the real self. If you are hurt by criticism, just remind yourself that it is only your ego that is hurt. Who you are really are – the soul – is not affected in anyway. With time, you will be able to respond in a more measured, positive way.

2. Separate emotion and substance What can you learn from the criticism? Sometimes, useful suggestions are given in the form of criticism. If we strip away the other persons’ emotion and unfortunate choice of words, there may be some suggestions and advice that we can usefully take on board. It is a good lesson to let go of our pride and see wisdom, even in a disguised form.

3. Life isn’t about immediate perfection. Sometimes we set up a false goal of perfection, but life isn’t like this. It is impossible to get things 100% right all the time. The real perfection is making continued progress throughout life. To make progress, mistakes and faults are an inevitability. We should see criticism in this light of the necessary process of transformation and progress. Here we are simply changing our perspective to criticism. Rather than seeing criticism as a bad thing, we see it is part of our journey.

4. Tough love. There are many stories of spiritual Masters who seek to perfect their disciples through tough love. If they only praised their disciples, their ego would just grow and they would fail to make spiritual progress. However, through criticising their weaknesses, it gives a chance for the aspirant to break down their ego and bring their higher self to the fore. A realised soul will be completely unaffected by criticism because he is secure in knowing who he is. He doesn’t feel the need to defend himself because he has attained a state of consciousness that is unaffected by the world. This is what we can also strive to aim for – the equanimity and inner poise to deal with any criticism of the ego.

5. Don’t feel guilty. A deep and often misplaced sense of guilt is the worst way to take criticism. When we feel guilty, we feel unhappy and it is like placing a large stone around our neck. If we avoid feelings of guilt, it is much easier to take a positive and constructive approach. If we can remain happy and detached, then we will have the inspiration to make a better effort. But, if we react to criticism with guilt and misery, it will compound any problem. (overcoming guilt)

6. Keep a sense of balance. It is human nature to focus on the faults of other people and what is wrong. Unfortunately, people often criticise the 1% of things that are done wrong, but fail to mention the 99% of things that you do well. If you find yourself criticised, don’t forget to remember the positive things that you have done. Perhaps you might even be able to mention that when responding politely to their criticism. But, equally, don’t instantly dismiss criticism. It is unhelpful to feel useless or invincible and always right. In reality, it is always somewhere in between.

7. Criticism can be beneficial. Every time people criticise you outwardly, you can guarantee that silently they have been criticising you inwardly a lot more. Sometimes it is better to be open to criticism (or lets call it constructive advice)Â  If people feel there is a forum for airing grievances, this will help improve relationships. If you can’t take criticism in any form, people may stop outwardly criticising you, but they will build up inner resentment, which is even worse.