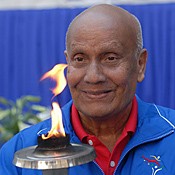 Sri Chinmoy (Chinmoy Kumar Ghose) was born in Chittagong, in what is now part of Bangladesh. At the age of 12 he was left orphaned when both his parents passed away. Therefore, with his 6 brothers and sisters he moved to the Sri Aurobindo Ashram, in Pondicherry, South India. For the next 20 years, he practised mediation, sports and participated in the daily ashram life. In 1964, he felt an inner command to come to the West and share the spirituality and yoga of India with seekers in the West. On April 13th, he landed in New York, where he lived until his mahasamadhi in October 2007.
World Harmony Run.

Sri Chinmoy teaches meditation is the most effective way to discover the inner realities of peace and real happiness.

Sri Chinmoy has been keen to promote sport and the idea of self transcendence. Self Transcendence means going beyond our previous limits. The Sri Chinmoy Marathon Team promote many running races, and triathlons including the world’s longest certified footrace, the 3100 Mile race.

In 1970, at the invitation of the then UN secretary general, U Thant, Sri Chinmoy began an interdenominational meditation group at the United Nations. Sri Chinmoy has done much to promote the ideals of religious tolerance and religious understanding.

One thought on “Sri Chinmoy”