Ms. Nilima Silver, Programme Coordinator of Sri Chinmoy: The Peace Meditation at the United Nations and UN Staff Member, was invited by the organizers to serve as Master of Ceremonies for the evening. In introducing the Choir, she explained that in 1970, then UN Secretary-General U Thant invited spiritual leader Sri Chinmoy to conduct meditations for peace at UN Headquarters in New York. Until his passing in 2007, Sri Chinmoy offered his multifaceted inspiration to the UN community through twice-weekly meditations, concerts and other programmes for peace. Sri Chinmoy also founded a non-governmental organization accredited with the UN Department of Public Information, the international Sri Chinmoy Centre, which provides humanitarian aid and promotes a culture of peace.

The singers are honoured to continue in this spirit. On this occasion the choir started with a poem by Sri Chinmoy, followed by several of his songs dedicated to peace and to the UN, with arrangements by members of the Choir.

Following the choir, the guest of honour, Yogmata Keiko Aikawa, gave the Keynote Address, which was followed by a panel discussion, with questions and answers.

The event served as a continuum to the UN International Day of Yoga, first proposed by Indian Prime Minister Narendra Modi during his speech to the General Assembly in September 2014. The Assembly later unanimously adopted a resolution recognizing that â€œwider dissemination of information about the benefits of practising yoga would be beneficial for the health of the world population,â€ and declaring 21 June the International Day. (See link to the resolution and draft showing initial co-sponsors) 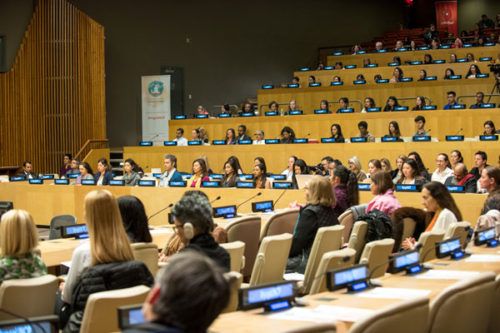 See also: Yoga and the UN Culture of Peace Program.pdf