The World Harmony Run was invited to the European Parliament in Brussels today. During a special program the runners shared Sri Chinmoy’s vision of world-peace and harmony with European politicians from different countries. 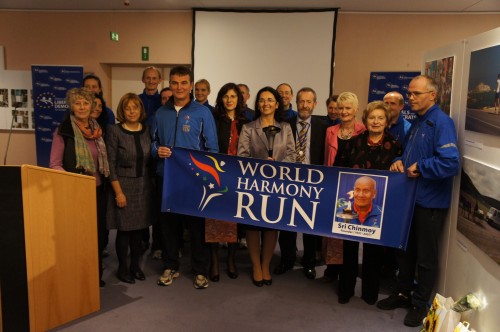 Ten MEPs (Members of European Parliament) from Ireland, Finland, Estonia, Slovenia, Luxemburg, Austria and Denmark participated in the program which took place inside the Parliament building. The MEPs held the Peace Torch and gave glowing speeches praising the initiative of running for peace. The ceremony was hosted by Angelika Werthmann, MEP from Austria.

A photo exhibition with photographs from the Run in Europe was presented together with the ceremony. The photo’s will be displayed in the European Parliament for the rest of the year.