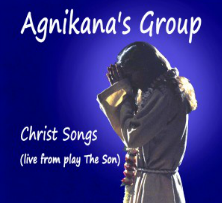 At Radio Sri Chinmoy, we have recently published a new album of songs about Jesus Christ – performed by Agnikana’s group.

The songs were recorded during a performance of the play ‘The Son’ in Karlínské Spektrum Theatre in Prague during February 2008. The Son, is a play written by Sri Chinmoy about the Saviour Christ. View: Christ Songs by Agnikana’s group

In the forward to the play, Sri Chinmoy writes:

Then he offered his human self, the agonized mind, the betrayed heart, the broken body at the Feet of God. And he offered his divine self-glowing Light, flowing Compassion, the world-Salvation at the feet of man.