Songs of the Soul – a concert dedicated to Maestro Sri Chinmoy

On August 25th, a variety of illustrious performers offered a concert of music dedicated to the musical spirit of Sri Chinmoy.

The concert featured music from:

The concert was held in Fifth Avenue Presbyterian Church 7 West 55th Street. A capacity audience enjoyed the concert which lasted for over 3 hours.

More pictures at Songs of the Soul Concert site

An all-night celebration of the life of Sri Chinmoy at the Hidden Gardens in Glasgow.

On the longest day of the year, the Sri Chinmoy Centres in Great Britain celebrated the life of Sri Chinmoy in a festival of readings, musical performances and a puppet show about incidents in the life of Akbar and Birbal.

The event was organised by Adarsha and friends and was held at the beautiful location of the Hidden Gardens, in the heart of Glasgow.  Janaka Alan Spence, started the program with a beautiful introduction and recitation of Sri Chinmoy’s poems.

Other groups performed including Hitaloka, Ananda and Shindu. Despite the unfavourable weather, many also stayed up all night singing bhajans to welcome the dawn on the shortest night of the year.

END_OF_DOCUMENT_TOKEN_TO_BE_REPLACED

Boris Purushottama Grebenshikov and members of the International Orchestra.

In 2007, Sri Chinmoy wanted to offer his dear friend Boris Purushottama Grebenshikov the opportunity to play at the Royal Albert Hall. Organised by the UK Sri Chinmoy Centres the concert was a great success and, with the encouragement of Sri Chinmoy, a repeat concert was scheduled for 2008.

Since Sri Chinmoy’s mahasamadhi in October 2007, Purushottama, wished to dedicate this year’s concert to his dear friend and teacher – Sri Chinmoy

The musicians kindly gave up a big chunk of their time to come together and perform this special concert. Very few of the musicians had played together before; but, they were able to achieve a remarkable degree of musical harmony and intuition in the short space of 2 weeks they had to practice. Even more remarkable was how well the divergent musical styles and traditions merged together, giving a unique performance. The musical styles varied from the classical Indian tradition of Arpan Patel’s harmonium and singing, to the Irish folk music of Brian Finnigan.

END_OF_DOCUMENT_TOKEN_TO_BE_REPLACED 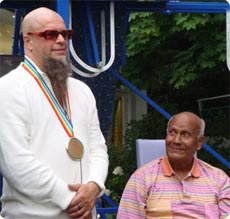 On Monday May 19th, the legendary Russian musician Boris Purushottama Grebenshikov, will be performing with an international ensemble of musicians at the Royal Albert Hall. The concert is dedicated to Maestro Sri Chinmoy.

Some of the Other Musicians who will be playing with BG include:

Since meeting Sri Chinmoy in Feb 2006, Boris Purushottama Grebenshikov has developed a close relationship with Sri Chinmoy. There was a mutual appreciation between two kindred musical spirits. Purushottama, meaning “the one who is beyond all limitations”, is a spiritual name given by Sri Chinmoy. During his life in the West, Sri Chinmoy was also a prolific musician performing in over 800 concerts, including 6 at the Royal Albert Hall.

In September 2007, he performed a concert at the United Nations building in New York, a concert which Sri Chinmoy introduced. Listen to full performance at United Nations…

In this interview at Sri Chinmoy TV, Purushottama explains how meditation has inspired his musical output.

Earlier in the Month, a similar concert – Songs of the Soul was offered in New York, by many musicians including Philip Glass, Roberta Flack, Steve Gorn and Samir Chatterjee.

On 29 August 2007, the United Nations headquarters played host to a concert by an artist whose striving for inner and outer freedom in his music exemplifies the goals of that august Organisation. Boris Purushottama Grebenshikov is a household name in his native Russia, and in particular he is widely credited with helping to usher in a new wave of artistic freedom in perestroika-era Soviet Union.

Almost half of his 35-year music career was spent creating and performing music with his “peaceful guerrilla” band Aquarium in the face of heavy restrictions from the Soviet state. Aquarium began life in Soviet-era Russia producing records out of a studio disguised as an engineer’s club, and holding underground concerts in private apartments; the intimacy of these secret concerts can still be felt in Grebenshikov’s lyrical singing style twenty years later, and has often led to his being termed the Russian Bob Dylan.

Despite the restrictions, Aquarium’s music found its way to every corner of the Soviet Union via pirated tapes passed on from hand to hand, which meant they were universally well known by the time restrictions finally began to loosen, and Aquarium – with Grebenshikov as the creative force behind the helm – were invariably involved in many of the landmark steps which paved the way for full musical freedom in Russia.

The goals of affirming “the dignity and worth of the human person” expressed in the United Nations Charter are echoed in Grebenshikov’s lifelong musical search for inner freedom and happiness. “The world is a perfect place.”, he enthuses. “The problem with us humans is that we don’t see it, we’re not being taught to see it. There is a great silence inside of everybody, the source of all inspiration, of everything.” For Grebenshikov, music gives a window into this source, and points the way to a better and higher way of living. “It’s a living feeling.” he explains. “When I sing I just feel alive, only more alive than for example now. Now I’m sort of fifty per cent dormant, but when I sing that’s when I really live”.

His search for inner meaning has also led to a long-standing interest in Eastern mysticism, spending much of the last 20 years travelling in India and Nepal and translating several important Hindu and Buddhist texts into Russian. The Eastern influence can also be seen in the name Purushottama, which was given to him by his friend and meditation teacher Sri Chinmoy, and which means “the one who goes beyond all limitations”. The concert was a wonderfully blissful experience for all who attended it, and Sri Chinmoy remarked afterwards that the performer had “brought down Heaven on earth”.

For the past twenty-five years, Sri Chinmoy has been travelling the length and breadth of the globe giving concerts of meditative music, offering those who attend the chance to let the music take them on a journey of the heart. This year alone he has given concerts in locations as diverse as Bulgaria, Thailand, Norway and Mongolia. However, this month saw him play closer to his New York home, as he travelled the West Coast of America to packed audiences in the cities of San Francisco and San Diego.

Sri Chinmoy has been singing ever since he was a small boy, and composing meditative music ever since early adolescence. Whilst in the spiritual community where he lived for twenty years, he learned to play the harmonium, a portable Indian version of the organ used to accomplany soulful songs. When he came to the West however, he felt an inner call to expand his capacities and take up more and more instruments to practise. Having freed himself from the mind’s confines through meditation, he is not subject to the usual hesitations and fears about not being good enough that normally occur when an adult takes up an instrument – he just dives straight in and gets joy just by making progress. In the early seventies, he began playing the esraj, a haunting Indian bowed instrument which is often the very first instrument he plays in his concerts. It is Sri Chinmoy’s favourite instrument, and one in which he is now regarded as being amongst the foremost exponents in the world. He went on to enlarge his repertoire to include instruments such as flute (Indian and Western), violin and cello.

In the mid 1980’s, Sri Chinmoy started performing dynamic and spontaneous improvisations on the grand piano. Nowadays, he will often perform similar improvisations on synthesizer, sampler or electronic percussion instruments; often these instruments are ingenious and novel creations by his students. All of this adds up to a very special concert experience for the audience – one in which Sri Chinmoy might be singing a soulful acapello song one minute, playing one of the hundreds of different instruments he has performed on over the years the next minute, and then bringing down powerful meditative energy with his synthesiser improvisations.