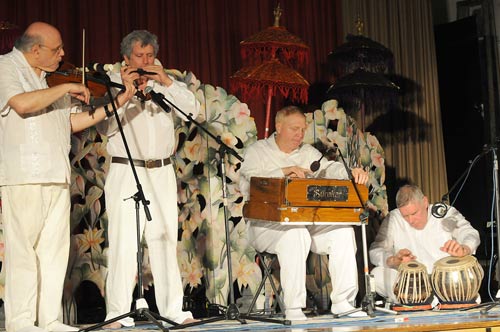 In New York, students of Sri Chinmoy recently offered a concert of spiritual music as part of a festival of meditation and spirituality.

The concert was held at Anna Silver Auditorium on Essex Street in New York; it featured a diverse selection of music and mantras offered by different vocal and instrumental ensembles.

END_OF_DOCUMENT_TOKEN_TO_BE_REPLACED

The Gandharva Loka orchestra include members of the Sri Chinmoy Centre from many different countries around the world.

END_OF_DOCUMENT_TOKEN_TO_BE_REPLACED 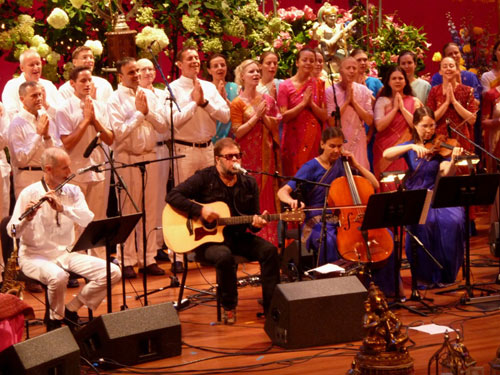 On September 2nd, Boris Purushottama Grebenshikov offered a concert of music in honour of Sri Chinmoy’s 80th birth anniversary. Purushottama was accompanied by tabla virtuoso Samir Chatterjee and a host of international musicians from the Sri Chinmoy Centre. The musicians played to an appreciative capacity crowd in the Skirball Center.

END_OF_DOCUMENT_TOKEN_TO_BE_REPLACED

In Kathmandu, in the foothills of the Himalayas, a musical concert was recently offered in celebration of the music of Sri Chinmoy.

Performers from the Songs of the Soul concert.

Sitars, guitar and tabla. Coverage at the Himalayan Times

Sri Chinmoy visited Nepal on two occasions in the 1990s. After a visit to Nepal, Sri Chinmoy wrote:

Sangit Surabhi is an all-female vocal and instrumental ensemble founded in 2007.  The group is based in Ottawa, Canada and comprises members from the Sri Chinmoy Centre.

Sangit Surabhi performing at The Garden of Light in Ottawa.

Music knows no frontiers.
It is free all-where.
Its contribution to emotional integration,
Human and divine,
Can never be fathomed.

END_OF_DOCUMENT_TOKEN_TO_BE_REPLACED

Musicians from the Sri Chinmoy Centre have been taking part in a concert tour across the Netherlands, France and the British Isles.

The Songs of the Soul concerts feature a range of musical interpretations from the music of Sri Chinmoy.

The tour has played to packed-out venues in Amsterdam, Paris, Oxford and Bristol. At the weekend the tour moves onto Dublin and then finishing in London on November 11th.

Many members of the public have offered comments for how much they enjoyed the concert.

“Thank you so much for this concert. It was very beautiful, exquisite!”

“Hello I have just returned home after a joyous evening at St Georges (Bristol), listening to the heavenly sounds of the singers and musicians performing some of Sri Chinmoy’s beautiful songs. It was a remarkable and uplifting evening; so wonderful to see the sparkle of joy on the smiling faces and shining eyes of all the performers….”

Read more and more photos at Songs of the Soul

A few selected photos from a recent Songs of the Soul concert in New York, celebrating the music of Sri Chinmoy. 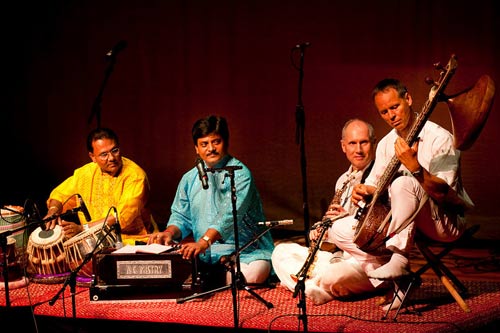 Top Indian musicians Tapan and Santanu joined by Premik and others.

A musical tribute to Sri Chinmoy by Maestro Leonard Bernstein.

Photos by Jowan and Prashphutita.

More photos and comments at New York Songs of the Soul

Ananda, a  group performing the music of Sri Chinmoy recently offered a concert at Bristol Cathedral.

The concert was held in the Charterhouse an ancient part of Bristol Cathedral. Over 100 people attended the concert of soulful music, performed by Ananda.

“When we play soulful music, we elevate our consciousness most rapidly. Soulful music is a form of aspiration, a form of meditation.”

After the concert – Sadanand (from Dublin Ireland), Devashishu, Upasana.

On 28th August, a variety of performers and guest musicians offered two consecutive Songs of the Soul concerts in honour of the musical legacy of Sri Chinmoy.

The music played was all composed by Sri Chinmoy, but had a range of interpretations, from the dynamic and energising Ghandava Loka Orchestra, to the beautiful singing of Mountain Silence

END_OF_DOCUMENT_TOKEN_TO_BE_REPLACED

Songs of the Soul Concerts have recently been offered in New York, Seattle and Vancouver. These are a few selected photos from the New York concert on April 16th. The concerts involved a variety of music groups playing performances of Sri Chinmoy’s music.

Audience enjoying the concert in the beautiful Riverside Church. 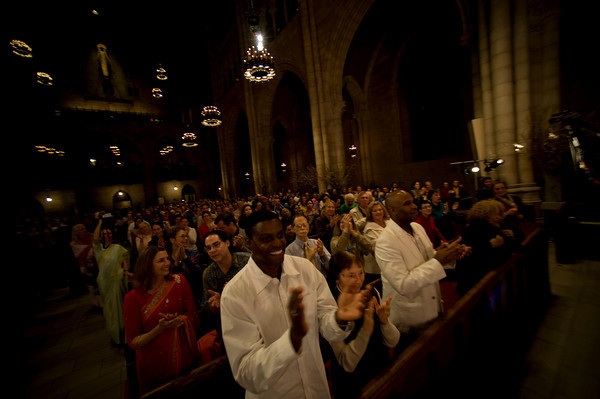 More photos at Songs of the Soul New York 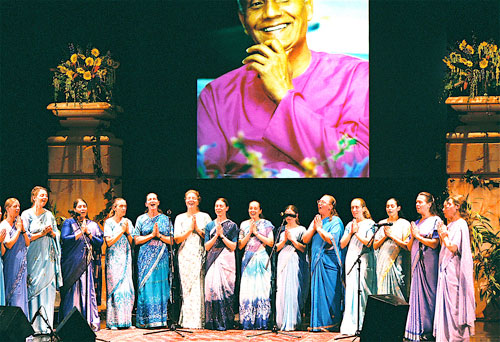 Songs of the Soul Concert