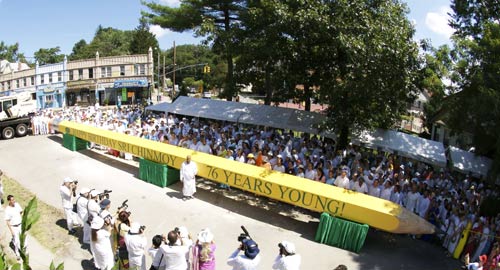 An international group of volunteers led by multiple Guinness world record holder, Ashrita Furman, have just constructed a 76 foot long pencil in Queens, New York, the longest pencil in the world. The pencil was unveiled to coincide with a commemorative function celebrating 76 years in the life of Sri Chinmoy, the internationally respected artist and humanitarian.

The pencil weighs in at over 18,000 pounds, with a 2 1/2 foot long eraser at its end. The ‘lead’ alone weighs over 4,500 pounds, and is made using a graphite core 10 inches thick, which had to be sharpened at the end using a powerful Sawzall reciprocating electric saw instead of your average pencil sharpener. A whopping fifty gallons of paint were needed to finish off the outside of the pencil. In all, an estimated two million regular pencils could be made out of the materials used in the construction.

Forty volunteers from twenty different countries spent two weeks constructing the pencil, working from 7am to 8pm every day with the occasional night shift as the project neared completion. For the project leader, Ashrita Furman, this record will be added to the 70 Guinness records he already holds. Ashrita, a health food store manager from Queens, has held the Guinness ‘versatility’ record for holding more Guinness world records than anyone else on the planet for the past twenty years. Ashrita first began breaking records way back in 1979, and since then has performed feats such as somersaulting the entire length of Paul Revere’s ride in Massachusetts, underwater pogo sticking in the Amazon, performing almost 10,000 situps in an hour under the Eiffel Tower, and bouncing the fastest mile on a pogo stick in Antarctica! In fact, he led a team to break this very same record back in 1996, building a 20 1/2 foot pencil which weighed 560 pounds, and which currently resides in the Guinness Record Museum in Niagara Falls, Canada. This record was shattered in 2002 by the famous stationery company Faber-Castell, who built a giant 64-foot pencil to adorn their offices in Kuala Lumpur, Malaysia.

Ashrita’s motivation in breaking records is to show people what is possible if they truly believe in their own potential. â€We should always push ourselves to do something greater“, he says. “What I love about the Guinness Book is that I can just go through it and choose something that Iâ€™ve never done before, train for it, and become the best in the world at that event. In a way, thatâ€™s also a challenge for me: to figure out how to train, the best way to train. The underlying principles are the same in my case, because in the end Iâ€™m going back to the inner stream, to the principles of discovering your own inner resources.“

Ashrita credits Sri Chinmoy with teaching him this philosophy of always transcending ones outer limits, and the record-breaking pencil is a token of appreciation for the tireless service Sri Chinmoy has performed in the cause of making people aware of what they are truly capable of. â€œI am not a natural athlete, but Sri Chinmoy has shown me that if one can be in touch with oneâ€™s inner spirit, anything is possible.â€, reflects Ashrita. For over forty years, Sri Chinmoy has been making prolific contributions in the fields of art, music, poetry and athletics – all to give a glimpse of what we are capable of if we but aside the mind’s hesitations and pursue our dreams. Interestingly enough, a significant portion of Sri Chinmoy’s artistic ouevre is comprised of pencil and marker drawings – many of them form part of his ‘Soul-Birds’ series, in which he depicts the unfettered human soul in the form of a bird. To date, he has drawn over 15 million of these birds ever since he began the series back in 1991. “For me, birds have a very special significance on a spiritual level.”, Sri Chinmoy comments on his drawings. “They fly in the sky, and the sky is all freedom. So when the birds fly in the sky, they remind me of the soul’s infinite freedom. I feel that if people come here to view these birds, their inner hunger to fly in the sky of infinite freedom will be fed.”