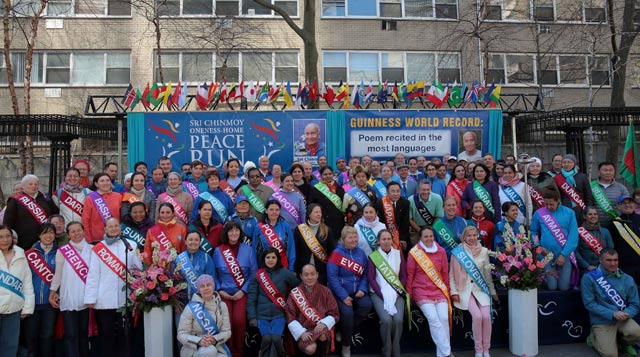 On April 10th, 2014, representatives from around the world joined together to set a new Guinness World Record for reciting a poem into the most number of languages – 203. The poem by Sri Chinmoy on peace was recited by more than fifty UN ambassadors, diplomats and Olympians; these distinguished guests joined with Guinness top record holder Ashrita Furman, and participants of the Sri Chinmoy Oneness-Home Peace Run.

The 206 languages ranged from Bengali and Maori to Newari and Zulu, it meant that the poem “O Dreamers of Peace” was expressed with some of the most unusual and charming communication sounds on the globe. The record was set during the launch of the global biennial Peace Run held at the Dag Hammarsköld Plaza across from UN Headquarters in New York City. It was here that Peace Run founder Sri Chinmoy led the Peace Meditation at the United Nations twice a week for 37 years. Ashrita said he wanted to break a Guinness Record this week in honour of the Golden Jubilee 50th Anniversary of the arrival in America of Sri Chinmoy 50 years ago.

The Peace Run and Guinness Record were highlighted by long-time UN Under-Secretary-General Amb. Anwarul Chowdhury, a long-time friend and countryman of Sri Chinmoy, who said: “This Peace Run symbolises the aspirations of all of us for world friendship and global peace and was founded by Sri Chinmoy in 1987—a visionary of peace and a person who believed in the oneness of humanity.”

Ashrita has been working on organising the world record non-stop for months. “The greatest challenges are in finding translators for languages which are spoken only by a few thousand people. For example, Bislama is only spoken by 6200 people in Vanuatu and New Caledonia,” he said.. Ashrita Furman has set over 500 Guinness World Records, including the record for the most Guinness records. The record set today is for the Guinness world record for “A Poem / Literary Passage Recited in the Most Languages“. 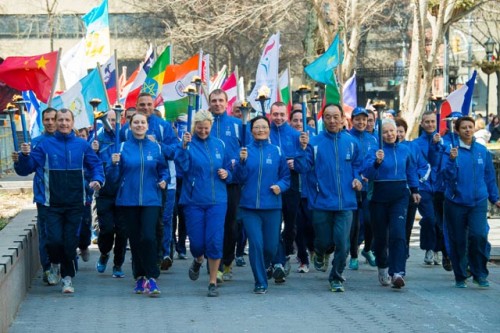 The Guinness World Record attempt also coincided with the start of the North American Sri Chinmoy Oneness-Home Peace Run. The Peace Run will travel 12,000 miles in the next four months as it travels through the US and Canada.

The Sri Chinmoy Oneness-Home Peace Run, formerly known as World Harmony Run, is a global torch relay that symbolises humanity’s universal aspiration for a more peaceful world and involves world leaders and millions of citizens every other year.

View more at the US Peace Run