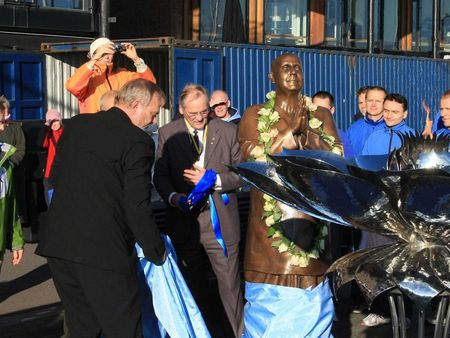 It is undoubtedly true to say that Oslo city in the last couple of days was quite cold. Today, however, October 27th, 2008, at about 1230 hrs, the breeze was quite fresh and the sun was shining intermittently in and through the heavens. Here at Honnorbryggen, Aker Brygge Port, Oslo, Norway, a small but expectant group of about one hundred and fifty people, were gathered together, eagerly and enthusiastically awaiting a very special Ceremony. It was about 12.30 p.m; the second World Harmony Interfaith Walk, and the unveiling of the Sri Chinmoy Statue at the Eternal Peace Flame, was about to begin.

The World Harmony Interfaith Walk arrived at the Eternal Peace Flame and the Statue at about 1300 hrs. There Husiar – one of the main organisers of the programme – acted as Master of Ceremonies and conducted the proceedings. To welcome the runners, a Norwegian Childrenâ€™s Choir, known as Aspirant Kortet, and their lovely conductress, gave an enchanting performance of the World Harmony Run song, the Norwegian National Anthem and a sweet, childlike and traditional song called Fola, Fola, Blakken. As the WHR runners were introduced, they ran into the Ceremony, and were heartily received by all present. The Interfaith leaders were asked to lead the group in a minute of silence for peace. They all offered a prayer, and Husiar concluded with another minutesâ€™ silence.

The former Mayor of Oslo, Mr. Svenn Kristiansenâ€™s speech preceded him, as it was uncertain as to whether he would arrive on time. However, he turned up immediately afterwards, and was honoured with the Torch Bearer Award of the World Harmony Run, for being an open-hearted champion of world peace. In his speech the former Mayor recognized the importance of the World Harmony Interfaith Walk, and expressed his pride in seeing people from so many countries working together to promote peace in their day to day lives and in their communities. Former Mayor Kristiansen also mentioned Sri Chinmoy and his gift of the Eternal Peace Flame, to the people of Oslo, his dedication to fostering religious harmony and oneness amongst peoples and nations. He also pledged his support for these noble ideals. He finally thanked the children and youth, recognizing them as the hope and promise of the world.

The next speaker was Dr Vidor Vambleim of the Centre of Peace Studies at the University of Tromso. He spoke of Sri Chinmoy as a man of dialogue. He also said that dialogue and searching for a common ground for peace was much easier in the presence of children, and praised the organisers for including children in the programme. He thanked Sri Chinmoy in Heaven, and wished that his message of peace and oneness, continue to inspire and uplift the world.

The last speech was by Mr. Paul Moen, Director of Aker Brugge Port. Mr. Moen was very instrumental in the installation and inauguration of both the Eternal Peace Flame and the Statue of Sri Chinmoy. He mentioned Oslo harbour as a focal point for Tourism, talked about his pride in having the Eternal Peace Flame in Oslo, and said that the flame represented the spirit of Oslo and the dedication of Norwegians to world peace. He also praised Sri Chinmoy, saying that although Sri Chinmoy was not tall physically, he stood as a giant of love, kindness and peace, and a champion of Interfaith Harmony. He touched on Sri Chinmoyâ€™s good standing with other world bodies such as the United Nations, Parliament of World Religions, and leaders such as Nelson Mandela and Mother Theresa. Mr. Paul Moen concluded by mentioning Kaivalya Torpy, the sculptor of the Statue, and afterwards invited Mr. Svenn Kristiansen, Dr Vidor Vamblaim and Kaivalya Torpy for its unveiling. This took place at about 1345 hrs.

About the Statue, it stood 2 metres tall (6ft 6 ins), majestically and powerfully overlooking the Eternal Flame. Arms folded in front in prayerful obeisance and seemingly in deep contemplation, Sri Chinmoyâ€˜s Statue appeared to be radiating light in abundant measure.

The evening had a cute conclusion with Mr. Paul Moen playing and singing a ballad-type song on his guitar, to the delight of all present.