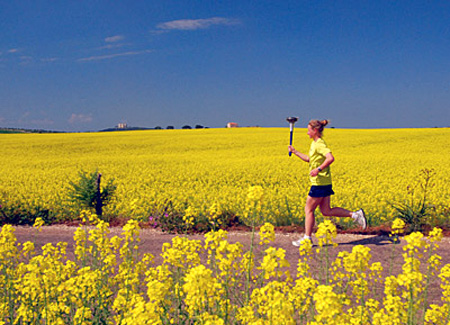 Members of the Auckland Sri Chinmoy Centre recently took part in a multi-cultural ceremony to help launch Auckland as a Peace city.

The 8th June 2013, saw the DVD launch of ‘Nuclear Free New Zealand: Auckland the Peace City’, a commemorative video documentary recapturing the highlights of last years high-level dedication of Auckland as a City for Peace. The 2012 ceremony in Auckland’s Aotea Square gathered generations of nuclear-free campaigners, peace organizations, keynote speakers from environmental and civic organizations, and musicians from all over New Zealand in a public outpouring of support for peace and a reliving and affirmation of the David Lange led campaign to establish a nuclear-free nation.

Sri Chinmoy Centre members were very active in the original ceremony – speeches; the full World Harmony Run team on stage throughout with several flaming torches; our runners in the procession representing the scores of support organizations; and media interviews – and last Saturday’s commemorative video launch had us again meeting up with our many friends from 2012.

The Auckland City for Peace Declaration was first adopted by the Auckland City Council in 2011, recognising its role in the promotion of a culture of peace based on social, economic and environmental justice, tolerance and non-violence.

Hosting last weekend’s event was the Soka Gakkai International (SGI) Buddhist group, with Auckland Mayor Len Brown among the many personalities who met up with our World Harmony Run-attired Centre members. “Auckland was at the forefront of 1985’s nuclear free movement”, he commented, “ and to be declaring ourselves as a City for Peace on the 25th anniversary of that decision is very fitting. “