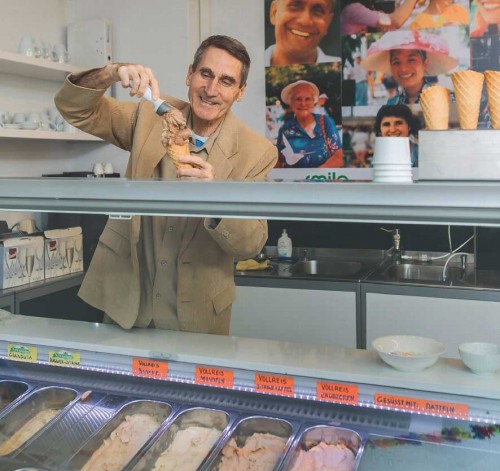 In Zurich, members of the Sri Chinmoy Centre have recently founded a new ice-cream bar/ cafe in the centre of Zurich.

The Divine Enterprise was inaugurated in January 2013, in the centre  of Zurich. The name of the enterprise is  “The Sacred and Secret Way of Amazing Strength” which had  been given by Sri Chinmoy himself some 12 years ago. Abarita Dänzer,  owner of the “Secrets of Perfection-Flames” (Tofu Factory) took over a  former vegan bakery and take-away, and transformed it into a Vegelateria. A unique new ice-cream parlour,  where you can get more than 20 different ice creams, all vegan and  without conventional sugar. The local newspapers as well as the vegan  community are happy about the new place which for the moment holds only  10 seats in additional to the Take-Away. From Monday through Saturday  Pradatta Schrottenholzer and his helpers also offer hot meals, a daily  soup, salads and drinks. Abaraita plans to enlarge to 25 and later to 75  seats as soon as the needed requirements from the Health Authorities  are fulfilled. Also planned are regular monthly exhibitions and events  covering subjects such as health, nutrition, meditation, consciousness  and awareness.