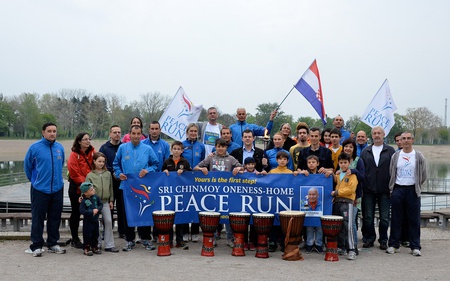 The European Sri Chinmoy Oneness-Home Peace Run is steadily making its progress across the European continent, offering a message of peace and goodwill. The Peace Run began it’s momentous journey in Belgium this February, before travelling through Portugal, Spain, France, Italy and now through the Balkan countries. It will continue to travel through many European countries before finishing in Belgrade this autumn.

President of the European Council, Herman van Rompuy lit the Peace Torch in Brussels to mark the beginning of the 2014 run (Link)

Mr. Van Rompuy said on the opening day “Establishing, maintaining and developing peace is an ongoing run, an ongoing battle. (…) So thank you for everything you are doing to bring people closer together. You are proving to us that taking part in this Run is not just exercise or sport. It is, I insist on it, a way of life.”

The Sri Chinmoy Oneness-Home Peace Run was founded in 1987 by peace visionary, Sri Chinmoy. This year marks the 50th anniversary of Sri Chinmoy’s time in the West, and remains a powerful vehicle for spreading peace throughout thousands of individuals around the world.

There is no human being on earth
Who does not have the capacity
To offer the message of peace
To the world at large.
But what is needed now
Is the soulful willingness. 1

Map of the European Route

The map of the run across Europe.

The Peace Run visits countless numbers of schools, allowing children to participate in this project for peace.

Runners from many different nationalities have participated.

Participants of the Run on the Portugal Spanish border

Runners on the south coast of France, Nice.